April 2016 - lambing started with some wins and some losses, early mornings and some late nights. Weather wet and cold after a welcome dry spell in March.

Dec 2015 - still mild (for the time of year) but wet and windy. The grass is lasting well so sheep aren't going through so much hay - which is good for our bank balance. But there is alot of winter to go yet

Oct - But it has turned into a glorious autumn with lots of grass and warm, dry weather. Birch trees turning a superb range of colours. Last lamb sale this week so fingers crossed.

July and Aug continued cold and wet with snow on Ben Wyvis into Aug. Shearing was a couple of weeks late and good hay is difficult (and expensive)  to come by. However, the first lamb sales weren't as bad as everyone feared (which is a bit of a back handed compliment). Keep buying Scoptch Lamb! 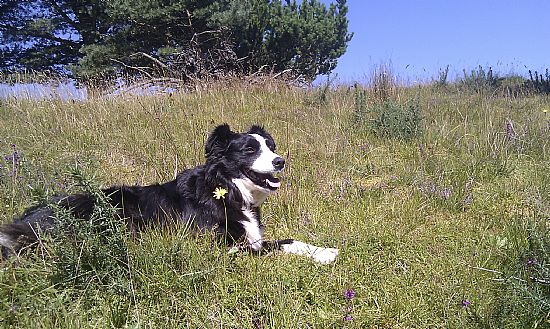 May and June - wet, cold, overcast so we are paying for the mild winter and good April. Growth very late and feeding for  longer than nomal. Grass now growing but still raining. Lamb prices 20% down on last year so doesn't look promising. On the postive side, the Dornoch Community Market continues to thrive - 2nd Wed in the month over the summer and 4th Wed as well in July and Aug.

April - lambing blessed by good weather until snow, hail, sleet over the last weekend. But the lambs survived. Now waiting for the last ones to lamb so we can get it over with and I  can have a long lie.

1st April Woke to 3 ins of snow - April fool anyone?

Jan 15 - severe gales this month which have taken down the aspen in front of the house following the loss of the conifers outside the garden and the shed last year. Real shame as the apsen must be getting on for 100 yeas old - will havwe to cultivate some of the suckers since life must go on!

Dec 14 - definitely winter now - gales and sleet at this level with snow on hills. But the autumn has been kind and there is till grass about for the sheep. Lamb prices were on a par with last year and cast ewe prices much better. Tups have been out for 4 weesk now so shoudl have done their stuff ready for lambing in April.

Big drop  in CAP payments this year with still some uncertainity over next years' payments. it shouldn't be this complicated, surely.

Hens now all  in their winter quarters.

July 14 - Mild winter and good spring means that we have lots of grass and the lambs are coming on well. Dornoch Community Market on 1st Wed of the month on the Cathedral Green is well attended and has a good buzz - come along.

May 14 =- lambing now over. Last lamb born yesterday. Weather was generally good which makes a big difference.  Dornoch Community Market now up and running for the season - by  the Cathedral on the 1st Wed of the month. Come along and browse the variety of stalls on offer. 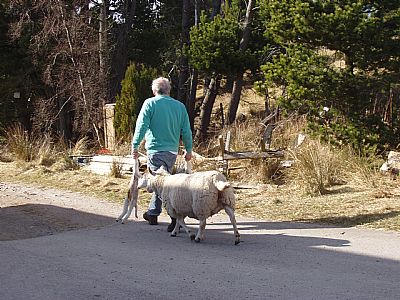 Mar 14 - stonkingly  good weather continues. Nesting birds are returning early and daffodils are out of the ground.

Feb 14 - we sit in the far north of Scotland with the grass still green and weather mild - while down in the south they have floods, gales and more floods. We had some strong winds in Dec which brought down a bunch of trees but normal amounts of rainfall and hardly any frost. "We'll pay for it later" as they say around here!

If you are interested in good quality food produced from crofts, check out

Nov 13 - First snows this week but didn't last. Autumn sales were slightly ahead of last year but costs rising faster. However, we have started a new year with the tups going out last week. The weather has been kind over the autumn with grass lasting longer than normal so sheep are in good condition. We are gettting the poultry into their winter indoor quarters and hatching chicks ready for the spring.

July 13 - we are just back from 2 weeks in South Africa visiting Eilidh to find that the weather in Scotland is much warmer and strikingly greener. Thanks to Peter, Caroline and Angela for taking care of the croft for us. That is the longest we have been away from the croft since 1998!

May 13 - lambing was generally good: numbers slightly up on last year and weather generally kind. Snow in May but it had all gone by lunchtime. Decided not to grow any hay this year - could be an expensive mistake but we will find out in due course.

Feb 13 - some frosty nights but mainly dry and bright. Sheep are getting nearer to lambing and we have now put them on high protein feed. Evelyn is busy hatching quail and bantams as spring approaches (we hope!)

Dec 2012 - it has stopped raining but we now have light snow and frost - but we have been spared the floods they have had further south. Last of lambs sold this week - prices well down on last 2 years. But we hope that next year will bring good things!

Into August 2013 now and it is still raining. I missed an opportunity to get hay baled on Tuesdayand now have to wait for the next spell of 2 days dry. I haven't even had the second field cut yet. Lamb sales start in a couple of weeks time so we wait for that with bated breath - prices then will determine whether it is a good or bad farming year.

May was a mixture of cold and too hot with not enough rain to keep the grass growing. But the lambs coming on nicely and lots of ducklings and chickens running around as well.

It didn't last into April! Cold and wet and we lost some lambs in fierce overnight downpours. However, better numbers than last year and no ewes lost.

March - glorious weather (for the time of year). Warmer than Ibiza and dry as well. I hope it lasts into April when we start lambing.

Early January 2012 - snow in Dec and gales and very wet into early Jan: the worst weather for sheep as wet fleeces lose insulation whereas they can cope with any amount of cold dry weather. And very muddy underfoot for sheep and humans. We have taken the tups out from the ewes so the next big event is getting the ewes scanned in Feb to make sure they are all pregnant.

However, late autumn has been glorious and dry warm weather continued into November. Tups now put out with the ewes so another annual cycle begins!

The good weather didn't last and rain over May, June, July and August has meant good grass but difficult hay making - got the hay baled fine but tropical downpours before we could get it inside has seriously affected the quality. Now into the season of lamb sales - prices so far on a par with last year.

Great weather in April for lambing and the usual mix of successes and disasters: 122 lambs living. Over 80% of the way through it now so there is a bit of time to catch up on all the other thngs that I should have been doing.

More snow in March but not too much. The weather in Nov has meant that our lambing percentages (based on scanning) are down on previous years - fewer twins and more barren. But

Feb was good and now we hope for early grass and a dry, mild April for lambing.

Lots of snow from end Nov through to Christmas and into Jaunuary which makes life tough for sheep, poultry, feedstocks, vehicles and the crofter. Not sure what the effect will be on lambing but it won't help. Going through lots of feed early in the winter but should just have enough hay to last, provided we get a normal winter from now on.

Very wet July and August but hay in, only 4 weeks late. Autumn sales successfully negotiated with prices running a little better than last year. Now getting the sheep ready for winter and for tupping. This means feeding up the ewes on the last of the grass so that they are more likely to have twins. Plus worming them and giving them vitamin and mineral supplements. Then we can put the tups in with them to get the lambs born in the spring, timed to coincide with the new grass.  Tups put out on the 12th of Nov so lambs should start arriving on 8 April.  Tups taken out in the 1st week in January.

Spring is peak time for poultry when geese, turkeys, ducks, quails and bantams will all be laying well. Geese and turkeys have stop around June but and ducks seem to have stopped now for the winter.

So hens, bantams and quail   eggs are available now.

We have also hatched some ducklings which are available for sale - Khaki Campbells which are good layers and pretty hardy: ring or email if you are interested.

The Dornoch Farmers Market starts up for the 2011 season in April - every 1st and 3rd Saturday of the month behind the Cathedral from 09.30 to 13.00. There is a good range of local produce available direct from the producers.

See www.dornochfarmersmarket.co.uk to see who is going to be at the next market.